With approximately 160 kilometers of coastline, there’s no shortage of beaches in the Costa Brava, but where are the best Costa Brava beaches?

Chances are that any traveler to the Costa Brava will travel through Girona, and they should. But, the real treats lie in the towns and villages along the coast. There five main areas in Girona: 1) Girona; 2) Alt Empordà; 3) Baix Empordà; 4) La Selva; and 5) the Pyrenees. But, what do these regions mean?

What Are The Regions Of The Costa Brava

Girona city is the capital of the province of Girona. The surrounding area is also referred to as Gironès. This is an area that extends beyond the city.

Alt Empordà and Baix Empordà refer to the geographic territory of the DO Empordà wine region. Alt Empordà (or, high Empordà) is along the coast, to the north, starting with Portbou, almost to the French border.

Alt Empordà meets Baix Empordà (or, lower Empordà), along the coast, around L’Escala. The area of Baix Empordà starts just south of L’Escala, and runs to just south of Sant Feliu de Guíxols. Many of the best Costa Brava beaches lie within these areas.

South of Baix Empordà is an area called La Selva, which includes some coast but also stretches into the plains, and heads in the direction of Barcelona. Some of the most popular Costa Brava beaches are located in La Selva because it is the closed stretch of coastline to Barcelona. 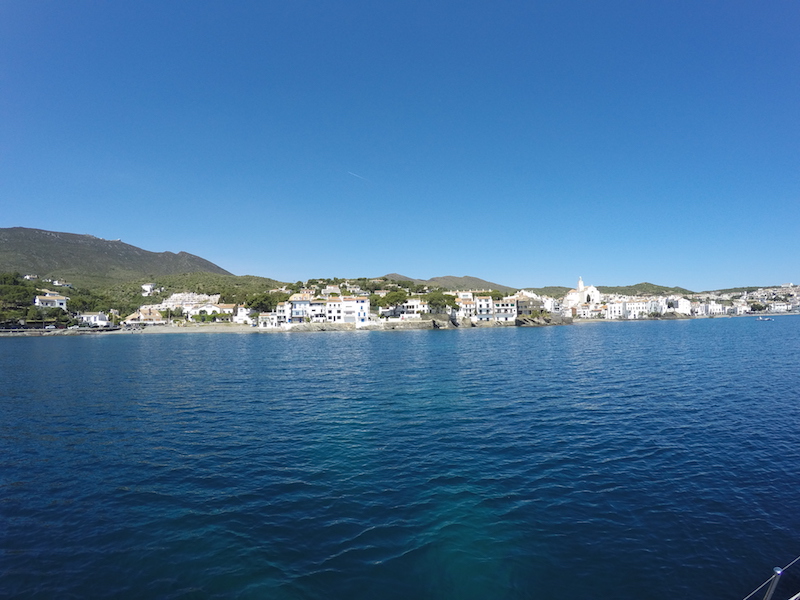 They benefit from the rich wine history of the Alt Empordà, as well as the influx of fresh seafood and fish, from Roses and El Port de La Selva.

The northern edge of the Costa Brava includes one of the most characteristic, and well-known coastal towns – Cadaqués. But, other, smaller, and lesser-known towns offer their own charm.

Portbou is a charming border village, where France is practically in sight. It’s the end of the line for the Spanish trains as well, as they go to “sleep” just behind the village, at the base of the mountains. But, it is a transit point as well, with trains crossing to and from France. Portbou offers a more international feel, but it is a lot less crowded than its neighbors to the south.

In addition to trekking options in the national park, the largest draw is the Benedictine monastery of Sant Pere de Rodes, which has stood since the 9th Century. It is accessible from both El Port de la Selva and Llançà.

The real star of the Alt Empordà coast is Cadaqués, which is set at the eastern edge of the Cap de Creus peninsula. Just driving over the mountain and through the national park to reach Cadaqués is something of an experience. It is one of the most well-known towns along the coast of the Alt Empordà, in part due to the influence of Salvador Dalí. Cadaqués served as the summer home for Dalí and for generations has been a home to artists and intellectuals.

See our recommendations for the Best Hotels In Cadaques.

Roses is larger and more developed than Cadaqués, which is protected by the hills and national park. Roses offers large beaches (a total of 19 in fact), secluded coves, and tons of options for water sports.

See our recommendations for the Best Hotels In Roses.

Heading south of Roses there are some more towns and villages, which are still considered as part of Alt Empordà, although they technically fall outside of the official DO Empordà wine region.

Slightly inland is Castelló d’Empúries, the historical heart of the Costa Brava. Once home to the capital of the earldom of Empúries. To the east is Empuriabrava, which hosts 30 kilometers of navigable canals, and is one of the most important residential marinas within Europe. It is sometimes referred to as the Venice of the Costa Brava, but the better reference is Miami Beach, with boats and yachts docked row after row.

Further south is Sant Pere Pescador, a small town located just a few kilometers inland, but surrounded by marshlands that are now part of the National Park of the Aiguamolls. With the nearby beach, it is a prime summer holiday area for families.

The southern tip of Alt Empordà includes Sant Marti d’Empúries, Empúries, and L’Escala, all in a row. This area hosts the Ruines d’Empúries. Founded in approximately 575 B.C. by the Greeks, it was an important trading post for the Greeks. And, it is possible to tour the ruins to this day.

L’Escala is the largest of the towns and is most recognized for its anchovy production. There is a big Sunday market, and it is known for its prominence in the festival calendar, with summer concerts, and an anchovy festival. L’Escala is also considered the break between Alt Empordà and Baix Empordà, as the official DO Empordà region starts up again just south of L’Escala.

Calma Blanca in Cadaqués: A charming, and luxurious, boutique hotel set in the hills, somewhat away from the bustle and the beach. With only seven rooms, it’s an exclusive retreat, giving more of a villa feel, with some rooms offering sea views and private outdoor pools. It’s also possible to rent a little Italian Ape to explore the surrounding area. 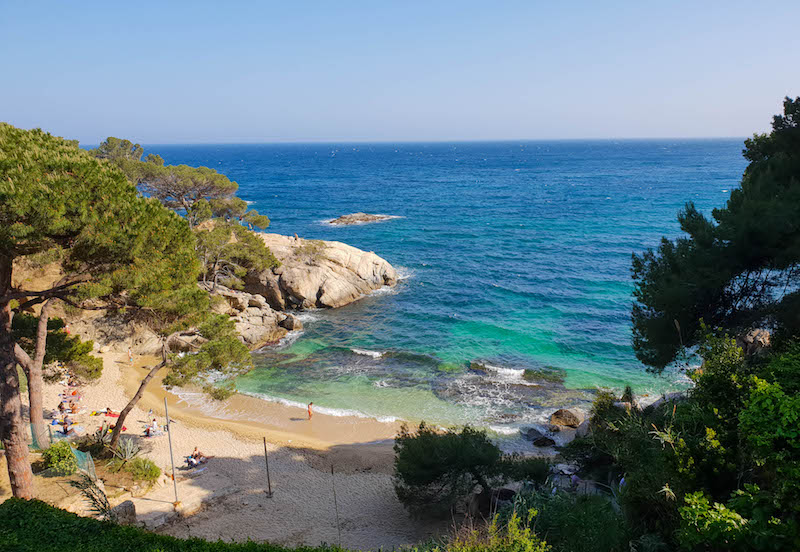 Whereas Alt Empordà is rugged, and the perfect destination for the wine tourist, Baix Empordà offers fewer wineries, but more developed tourism. There are more villages and towns within the stretch between L’Escala and Tossa de Mar to explore.

It’s possible to hop around, a few nights in several towns. Or, choose one for a week-long stay and take day trips to explore the little beaches, hidden coves, wineries, and Michelin Star restaurants. In the case of the latter, rent an apartment or villa to holiday like the locals do when visiting the Costa Brava.

When looking at a good map, there seem to be about a hundred beaches, or platges, along this stretch of the coast. Some of the beaches are merely coves that require a boat to see. Many of them are quaint and beautiful. The most popular towns to visit, from north to south, are L’Estartit, Begur, Tamariu, Llafranc, Calella de Palafrugell, Palamós, and Sant Feliu de Guíxols.

Larger towns, like Palamós, are year-round towns, whereas smaller ones, such as Tamariu are seasonal and virtually shut down in cold weather. All are pretty full during July and August, when travelers from nearby European countries, and from Barcelona, descend on the beaches. The real charm of these locations is best experienced in the spring or autumn.

See our recommendations for the Best Hotels In Begur Spain

How To Choose The Best Costa Brava Beach Town

How to choose? First, choose big or small. Then, pick a place with a hotel or apartment or villa rental that meets your needs, and go from there. Each offers great food, beautiful water views, swimming, and activities. Some recommended hotels are remote, requiring a car. Others are set inside the town, which means it is possible to walk from the hotel for dinner or drinks.

There are also a few interior towns worth mentioning, including Pals, which is a pedestrian-friendly, medieval hilltop village only a few kilometers inland from the beach at Pals. Palafrugell is a larger, more commercial town, with shopping and restaurants. And, the county seat of Baix Empordà is La Bisbal D’Empordà, which was once the seat of the bishop. Currently, it is known for the production of terra cotta and is one of the centers for the traditional Catalan dance, the Sardana.

Sallés Hotel & SPA – Cala del Pi in Platja d’Aro: Nestled within Cala del Pi Bay, the Sallés Hotel offers a spa and an outdoor pool with unrivaled views of the cove and coast. Chef Enric Herce’s creative cuisine at Rosa dels Vents makes the hotel a destination within a destination.

Rooms start at €160 a night. They offer gastronomy and romance packages, as well as a sea exploration that includes a sailboat excursion. Book Cala del Pi here.

Check out this video of Cala del Pi, one of the most adorable little Costa Brava beaches!

La Selva includes many of the most well-known seaside destinations for Catalans and Spaniards alike. Some of the towns have a reputation for family seaside escapes and raucous weekend parties. These destinations tend to be filled to the brim during July and August, particularly on weekends. But, in the spring and fall, they can be lovely.

The three most popular destinations in La Selva include Tossa de Mar, Lloret de Mar, and Blanes. Tossa de Mar is an old fishing village, with remnants remaining of the old village walls. At the edge of the beach, travelers can climb into the old town and visit the stone castle that stands guard over the beach.

Blanes, the most southern of the destinations, represents the start of the Costa Brava. Blanes offers a good amount to explore for gastronomic travelers, including a large fishing port, a cava producer just outside of town, a cooking school, and a handful of craft beer producers. 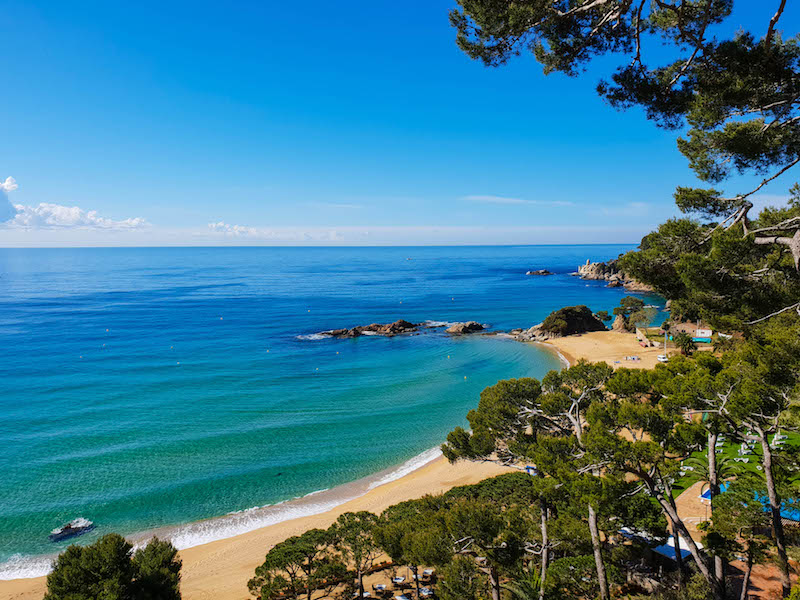 Santa Marta Hotel in Lloret de Mar: Celebrating 60 years in operation during 2018, Santa Marta Hotel offers a unique glimpse into the history and traditions of the Costa Brava. The Noguera family is proud of the legacy and heritage of the hotel and in their personalized approach to guest relations. The hotel is all about the view, with unparalleled vistas over the Mediterranean.

On water level, Santa Marta offers a beautiful sandy beachfront, a large pool, a chiringuito (a beach grill), and activities. Set over eight hectares, Santa Marta is a self-contained retreat. Lloret de Mar is right down the road and can be reached even by Catamaran. But, the property feels remote. Set between Llloret de Mar and Blanes, it is meant to be an oasis along the Costa Brava.

How to find the best rates for hotels